Antwerp, June 6, 2018 - LCL, specialist in data center management, and Karel de Grote Hogeschool (KdG) join forces to develop "The Things Network". This is a global, open Internet of Things (IoT) infrastructure that everyone can join for free. Everyone can also contribute by placing a gateway. LCL places such an IoT antenna on its data centers in Antwerp, Diegem and Aalst, which increases the range of the network.

The Things Network is a global community that wants to expand the Internet of Things (IoT) network to create as much connectivity as possible. The technology used for this is called LoRaWAN. This technology connects to the internet without WiFi, 3G or Bluetooth. LoRaWAN is an open standard, uses little battery, has a large range and low bandwidth. The Things Network brings IoT networks together through a joint approach and wants to set up a robust and secure infrastructure that is open to everyone.

The Internet of Things connects smart devices with the internet to exchange data and is used, among other things, for self-driving cars and smart thermostats, but is also increasingly being used in industrial and production environments to monitor business-critical processes.

Karel de Grote Hogeschool, more specifically the "Multimedia Technology" department, installs and maintains the gateways at the three LCL data centers. "LCL is committed to supporting the network and encouraging others to do so," says Lorenz Adriaensen, researcher and lecturer "Multimedia Technology" at KdG and founder of the Things Network community in Antwerp. “We are also looking into whether there are other options for working together, for example through internship projects for our students at LCL. Multimedia Technology is a broad education that is technically supported. "

The aim of KdG is to place as many antennas as possible to further expand the IoT community, conduct research and thus allow students to experiment with the new technology.

The Internet of Things is constantly expanding. "We are evolving towards an increasingly connected society," says Laurens van Reijen, managing director of LCL. “Like our data centers, the Internet of Things is an ecosystem. It is an interactive network that exchanges an enormous amount of data with each other. That data must also be stored somewhere. The connectivity must be constantly available, otherwise critical business applications can fail and that has far-reaching consequences. ”

Today, on 6 June, LCL will be present at the "Internet of Things Convention" in Antwerp, together with KdG. More information: https://iot-convention.be/ 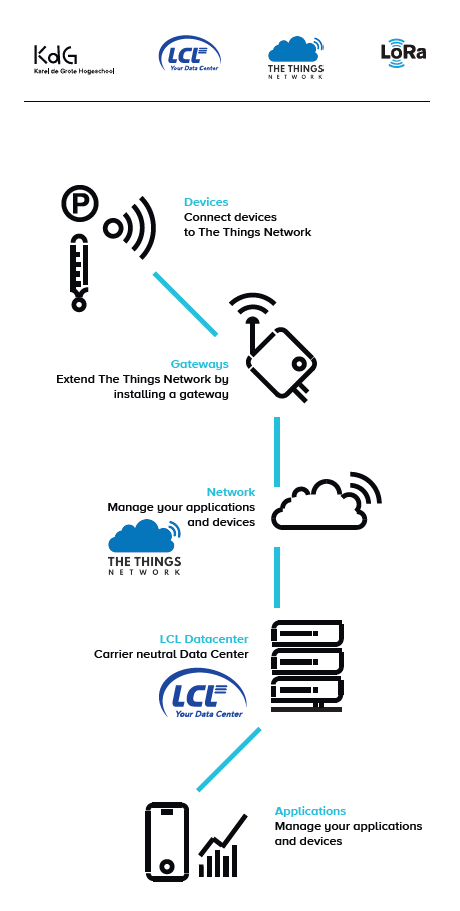